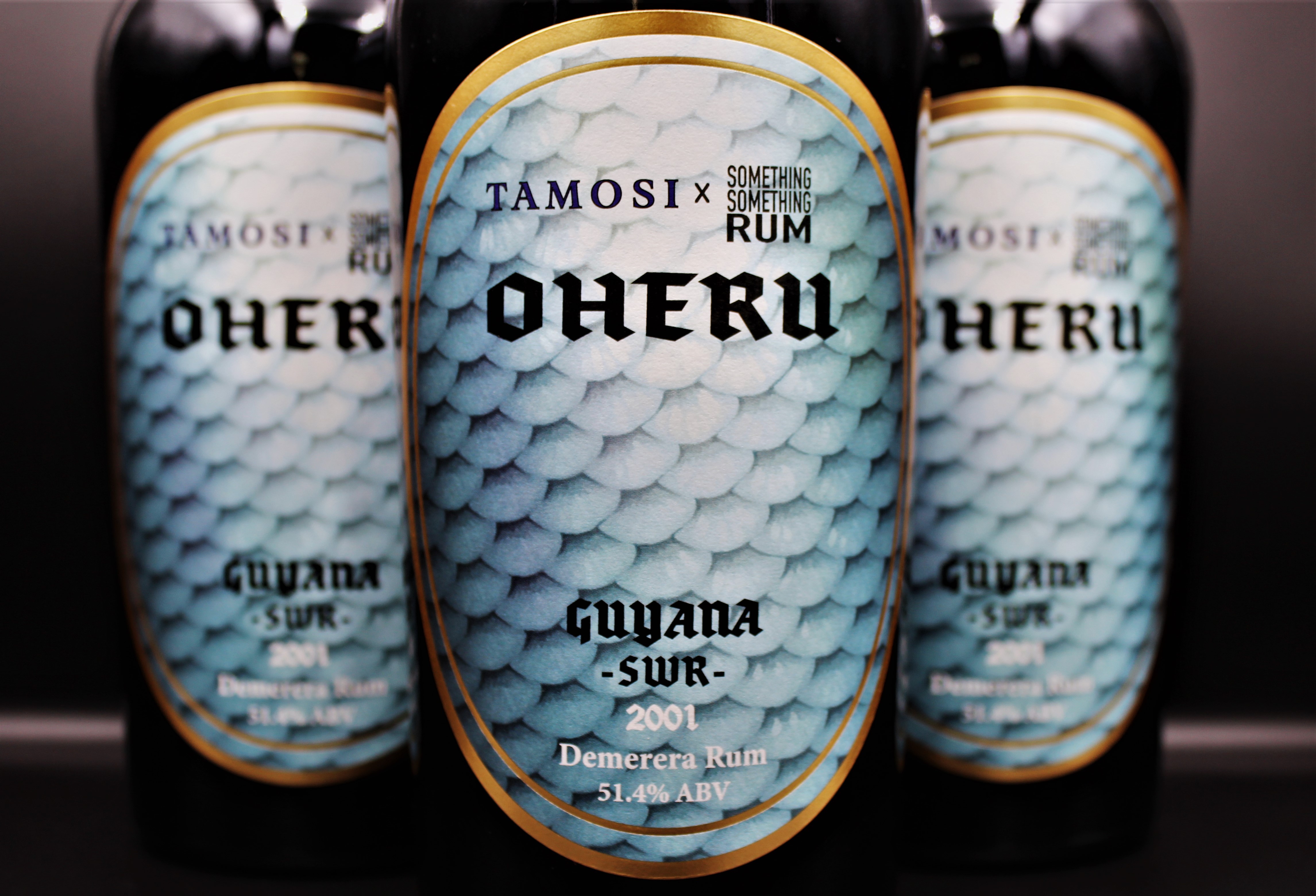 Distilled on the Savalle Still in 2001 at the Diamond Distillery in Guyana. This rum carries the marque SWR, a marque that is attributed to the long closed Skeldon distillery. The 4-column Savalle still, obtained from the Uitvlugt distillery upon its closing, is responsible for making at least 9 different marques. Whilst the SWR/Skeldon marque was the technically lightest marque made on that that still it is in no way short on flavour!

This rum was coloured with some caramel prior to being put into barrels. We use no flavour enhancing additives in the bottling of our rums.

Oheru or Oriyu in the Lokono/Arawak language refers to a water spirit or “Mother of serpents”. The root of Oriyu being Ori: Snake.

The story on the bottle tells the tale of the Semeci/Semecihi (healer) Arawanili, his interaction with Oheru and the origin of the Calabash. The story introduces us to Yauhahu, who are nature spirits of the forest that often cause misery, sickness and death. In fact, the word for pain is: Yauhahu Simiaira which translates as the nature spirit’s arrow.

Becoming a Semici is a sacred calling, the following is an account on the process of becoming a Semici: Once chosen the prospective Semici is taken to a small hut, where they spend an extended period of time in solitude, eating only a very limited diet. After the period of solitude and fasting they drink a concoction of tobacco leaves boiled down in water (to around ¼ volume). This puts the prospective Semici into a death-like state, it is in this state that the spirit leaves the body to commune with the Yauhahu and to receive power from them. And following the fateful meeting of Oheru and Arawanili each Semici has their own Maraka, a most powerful tool in interacting with Yuahahu.

Oheru is often referred to as being capricious, dreaded and resembling a mermaid in appearance. However, in much of Amerindian storytelling, whether it be the story or Arawanili and the Calabash or the story of Manoo, she is portrayed as being rather benevolent (giving Arawanili the means to end his peoples suffering, or providing an endless supply of food for Manoo’s village). It is said that Oheru amuses herself by terrifying men and pulling their canoes to the bottom of the river. When canoeing near an area where Oherus are known to inhabit, people used to blow a special horn, waiting for a roar from the Oheru in response, so they would know to turn around and avoid that part of the river. Later Afro-Guyanese populations had a similar concept to Oheru, but called her Water Mama.

In 1841, Maraka-Kore, a Lokono Chief, remarked that the story of Arawanili and Oheru did not take place in Guyana, but in fact took place in Kaieri (now known as Trinidad), and that Arawanili did not die but returned to the skyland. But more or Arawanili at a later date.

Lokono-Arawaks – Damon Corrie (Chief of the Eagle Clan Arawaks (Provides a huge amount of information on Lokono-Arawak culture from a Traditionalist Lokono perspective):

Animism and Folklore of the Guyana Indians – Walter E Roth (Contains an extended discussion on Oriyu, Water Spirits and Water People in general):